Troy Evans preaches at Edge Urban Fellowship in a rundown Grand Rapids, Mich., neighborhood known for prostitution. Inside what looks like an abandoned office building are walls covered by graffiti. There are tattooed people wearing baseball caps and jeans. Three 20-year-old men holding mics get ready to bust out some elaborate dance moves.

It may seem like a hip-hop show, but it's actually church.

While Evans preaches to about 100 people on a given Saturday, he has no seminary training and dropped out of school in the 7th grade. His goal is to reach out to kids who either don't have families or are joining gangs. Evans knows exactly what that's like: He was on his own at 16, the leader of one of the dozens of gangs in the area. He says gangs helped him feel that he was part of something bigger than himself.

Emmett Price, a professor of music and African-American studies at Northeastern University in Boston, says the churches are on the rise in the U.S. and that they appeal to the latchkey generation.

"Hip-hop culture comes out of the moans and the cries of young people who felt ostracized and disenfranchised from society," Price says.

Now that Evans, who was part of that generation, has left the gang life behind, he's reaching out to those who might be getting involved.

"Our idea of church, holistically, we become surrogate parents," he says.

And one of his surrogate kids is Steven Malcolm, who's onstage performing a song he spent hours writing and producing. Malcolm says Evans plays an effective role sharing his story and spending time with the residents here.

"The one thing all of me and the five other cats [I hang out with] ... have in common is that none of us have our dads," he says. "They're either locked up [or] dead, and Troy has truly stepped in and is a father in our lives."

Evans says church and gangs can also both provide a feeling of safety, community and family. His goal, though, is to get more residents here to turn to church for those things, not the streets. 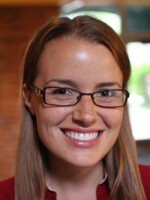 Emily Fox
Emily is a reporter and producer for Stateside and fill-in host for Morning Edition and All Things Considered.
See stories by Emily Fox