A Bouquet Of Poets For National Poetry Month

Poet Kevin Young says there are so many different kinds of poetry, even people who think they hate it should reassess. "I think of [poetry] more like music," Young told me last year. "Like, if someone said, 'I don't like anymusic,' I would be like 'Who are you? I don't understand.' They haven't found the right music to me, then."

Same with poetry, he says: "I think we have to help people find the right poem for them."

Well, in honor of National Poetry Month, we have an assortment of amazing poets for your consideration. A bouquet of poets! Their work covers everything from immigrants' lives to connecting with animals to the ache of a mother lost too young. Our poets are spread all across the country, and have roots all over the world. Dip in, find the poem—or the excerpt of the poem—that speaks to you.

Ada Limón writes about the expectations that other people's assumptions sometimes place upon her. She was inspired to write it after she was asked to read at an event, and the organizers wanted her to do it in both English and Spanish. Which she says was problematic "because I don't write in Spanish. I am not bilingual. I do identify as Latinx, but ...I felt at that time I was being asked to be someone I am not, and I take that very personally."

Excerpt from The Contract Says: We'd Like The Conversation To Be Bilingual

"It's like the difference between tokenization and representation," Limón concludes. "It's one thing to be on a stage because your work is being recognized. It's another thing to feel like your work is there because they needed someone brown."

Ashley M. Jones wrote a provocative poem called Slurret. "It's a Shakespearean sonnet which is comprised mostly of slurs used against black people, " she explains. "It's also sort of a retaliation against the literary canon, and the traditional sonnet form."

Jones says the poem uses "all the trappings of the oppressor "— iambic pentameter, a rhyme scheme.

"It's a sonnet in every way, except it's not talking about the fair maiden, or a rose, or any of the other non-political white subjects that sonnets were written about in the past. Instead, it's attacking racism and elevating the black experience to this level of art."

Solmaz Sharif is an Iranian-American poet — although according to poet Kaveh Akbar, she should be known as "one of our greatest poets, without qualification." Her first published poem was written at age 13, and she hasn't glanced back. Sharif teaches at Stanford, and this excerpt from Expellee comes from her soon-to-be-published volume, LOOK.

Jericho Brown has written three collections of poetry; his newest is titled The Tradition and the excerpt from this poem, Stand, talks about the dilemma of being human in an inhumane time.

Even though Stand came from a breakup, Brown says he's glad he could write about something so human. Especially now, he says, when everyone feels the need to be an activist all the time. "What I'm really interested in is how love, and in this particular case, black love, stands up in the midst of so many trials. How black love — how love itself survives, no matter the world or the political climate."

Brown told us that one of his favorite poets is Lucille Clifton, who mastered the art of making even the mundane marvelous. Here's Lucille Clifton's poem, Homage To My Hips:

That was a celebratory poem; this is a beautifully sad one, from Fatimah Asghar, who writes about the loss of her mother in, Kul. It's from her book If They Come For Us:

Asghar says part of the inspiration for this poem came from realizing the possibilities that open up in different languages: "Sometimes when we think or read or write in one language, it actually can be these weird limitations on our imagination because there's all these words in other languages that show us different possibilities of meaning."

Asghar, in turn, admires the work of Ross Gay, an African American poet, writer and gardener, whose newest books of essays is The Book of Delights. The poem excerpted here is called Becoming a Horse, and he says it was inspired by the way he first met one "in a true way."

Jimmy Santiago Baca wrote "I Am Offering This Poem" (which we've excerpted) in tribute to immigrant mothers and their love.

He says this is a poem about communicating love: "When you love somebody so dearly that not all the gold and all the silver and all the diamonds in the world would make them believe you love them, then a poem like this, as simple as it is, given to the person you love the most on earth, completely understands and appreciates its worth."

Sally Wen Mao grew up hearing the old myth that if you dig a deep enough hole in your backyard, you'll end up in China. In "Empire of Opposites," part of a longer poem called Antipode Essay, Mao sets us straight:

(Oh, and for the record: you won't end up in China. Mao says you'd end up in a clutch of islands that are largely uninhabited, and often referred to as the Desolation Islands.)

Michelle Otero is the Poet Laureate of Albuquerque, Nex Mexico—something she would not have foreseen as a young person, when she saw poetry as something for people who didn't look like her. But she realized later, she says, she'd been looking for poets in all the wrong places: "I was surrounded by artists and poets and stories my whole life, even though in their day jobs, they were mechanics and teachers and people who worked with their hands."

Now that she's a poet, she finds herself going back to her family and neighbors "and trying to recapture their speech patterns and the way they spoke and told stories." Her poem Hair Ghazal takes the formal structure of a Ghazal — a poem in stanzas in which one word is repeated to form a rhythm.

Denver poet Diana Khoi Nguyen writes about family, dislocation and grief in her poem Ghost Of, from a collection of the same name. She believes generational trauma shaped not only her parents' lives, but her and her late brother's. As teenagers, her parents fled Vietnam during the war. Here's an excerpt from Ghost Of:

Haunting. "That poem was a way for me to investigate and reconcile all the things I'm angry about—but also tender about."

Finally, as George Harrison wrote in Here Comes The Sun, "It's been a long, cold lonely winter." And if you thought yours was bad, think about this: Hieu Minh Nguyen lives in Minnesota. Minneapolis, to be specific. He writes about the end of winter, when it's not quite yet spring, but he can see the light at the end of the tunnel.

"Most people think talking about the weather is small talk," Nguyen says, "but for us in the Midwest, it's also a way of checking in on each other."

We loved so many of these poems—we hope you found ones that resonated with you. Happy Spring!

Have a favorite poem, or memory of one? Send it to us with a couple of sentences about how it affected you, and we may include it online. Hit us up at codeswitch@npr.org with the subject line "CS Poetry."

And to hear some of these poets read and talk about their work, listen to the latest episode of the Code Switch podcast.

Karen Grigsby Bates
Karen Grigsby Bates is the Senior Correspondent for Code Switch, a podcast that reports on race and ethnicity. A veteran NPR reporter, Bates covered race for the network for several years before becoming a founding member of the Code Switch team. She is especially interested in stories about the hidden history of race in America—and in the intersection of race and culture. She oversees much of Code Switch's coverage of books by and about people of color, as well as issues of race in the publishing industry. Bates is the co-author of a best-selling etiquette book (Basic Black: Home Training for Modern Times) and two mystery novels; she is also a contributor to several anthologies of essays. She lives in Los Angeles and reports from NPR West.
See stories by Karen Grigsby Bates 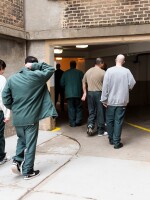