The Houston Astros have taken a 3-2 lead in the World Series after defeating Washington 7-1 in Game 5 in the nation's capital, pushing the underdog Nationals to the edge of elimination.

A pair of two-run homers from Yordan Alvarez in the second inning and Carlos Correa in the fourth gave the Astros the lead. Houston ace pitcher Gerrit Cole dominated Washington's line-up for seven innings, with the only blemish a shallow homer that Juan Soto muscled to left with one out in Cole's final frame.

Cole retired Washington's Victor Robles with a highly questionable call on a 3 and 2 count to finish his night. The Astros continued to pummel Washington in the top of the eighth with a double from George Springer and a two-out base hit from Yuli Gurriel. Houston added its third two-run homer of the night in the ninth when Springer connected with a massive shot to left off Daniel Hudson to nail the victory.

Billed as a legendary match-up between Cole and Washington's Max Scherzer, the Nationals stunned reporters, Nats fans, the Astros and everyone else in America who has been following the series by announcing a few hours before game-time that Scherzer would be scratched from the contest with spasms in the area behind his right shoulder.

Enter hybrid starter/reliever Joe Ross, who was 4-4 in the regular season with a 5.48 ERA. Ross had pitched two scoreless innings on Friday night. The 26-year-old, just a couple of years removed from Tommy John surgery, found himself Sunday pitching in the glare of the biggest spotlight possible - a pivotal Game 5 of the World Series.

Ross made it through the first inning unscathed but in the second, 22-year-old rookie Alvarez followed a Gurriel infield hit with a two-run homer to put the Nats in an immediate deficit. The Nats tried to answer back in the bottom of the frame starting out with singles from Soto and Howie Kendrick to put men on first and third, but Robles hit into a double-play to end the threat after a Ryan Zimmerman strike-out.

In the fourth, Alvarez singled and shortstop Correa doubled the Astros' lead with a two-run homer to left off Ross. Sporting a 40-0 career record with a four-run lead or more, Cole looked to be in complete command of the evening. Ross was finished after five.

Through six innings, Cole allowed only one base-runner; a walk to Anthony Rendon. Then Soto connected with a solo homer to left to give the Nats a breath of life and finally something for the home fans to cheer about.

Zimmerman walked on a borderline pitch but Robles took a third strike on a questionable call to kill what might have been a promising rally. The Astros tacked on one more in the eighth and two more in the ninth with Springer's moonshot.

A boisterous, anxious, World Series-starved city that thought it might finally put its diamond demons to rest, has had its dreams put on hold. The Nationals had given themselves the chance to win it all at home after unexpectedly taking the first two games of the Series in Houston but the hill ahead looks steep.

The Astros are proving why they may be one of the most complete teams in the history of the sport, shutting down the Nationals' bats, sweeping all three games at Nationals Park and now standing at the brink of their second title in three years.

The underdog Nationals have repeatedly defied the odds along their improbable path to the championship Series. Beginning Tuesday, they get to prove if they are a team of destiny or if, in the end, it was all a magical mirage.

It is odd that no team in this Series has managed to win a single game at home. But as the Series returns to Houston on Tuesday, the larger sample size of the regular season shows the Astros were a major-league best 60-21 at Minute Maid Park. Then again, the Dodgers, who were upset by Washington, were 59-22 at home and lost the deciding game of the NL Division Series in Los Angeles.

The Astros led the majors with 107 regular-season wins for a reason. Tested and victorious over the Tampa Bay Rays in a deciding game five of the NLDS and then taking the New York Yankees in six games, Houston has shown an ability to rebound in the playoffs when it's been needed the most.

They have often been led by their offensive spark plug, second baseman José Altuve, who walked off the Yankees in the American League Championship Series with a dramatic, pennant-clinching, two-run homer in the ninth inning off Aroldis Chapman.

Houston's offense came to life in Washington. Alex Bregman, the 41-homer clean-up hitter for the Astros, returned to form with a Game 4 grand-slam after a previously horrid playoff run. The Game 5 homers by Alvarez and Correa underscored the offensive resurgence. The Astros' starters and bullpen have been clutch. They seem to have neutralized or at least contained Washington's biggest offensive weapons, Soto and Rendon.

With Scherzer's status uncertain, no one is quite sure what happens next. It looked like 18-game winner Stephen Strasburg would start for Washington Tuesday night. Nats skipper Davey Martinez, however, says the team is keeping Scherzer on the roster in the hopes he can start Games 6 or 7. The Nats will go up against Justin Verlander Tuesday, who for all his career achievements is the first pitcher to register five World Series losses.

Through their playoff drive, the Nationals have been led by a combination of young talent embodied by 21-year-old outfielder Soto, stars like third baseman Rendon; wily veterans like Zimmerman, who first took the field in 2005 after the Montreal Expos relocated to Washington; and an impressive collection of starting pitchers.

Scherzer, Strasburg, Pat Corbin and Aníbal Sánchez have all shown occasional dominance but have completed their outings with mostly gutsy, nerve-wracking, clutch performances.

Scherzer, Strasburg and Corbin's occasional relief work has also helped mask a bullpen that, with the exception of Sean Doolittle and Hudson, is a frighteningly shaky enterprise given to total implosions of the kind that occurred Saturday night when Bregman hit his grand-slam off 42-year-old Fernando Rodney.

But anyone writing off the Nationals does so at their peril. Washington has been downright magical through the regular season and the playoffs.

On May 23, sporting an atrocious record of 19-31, second worst in the National League at the time, the Nats had a statistical probability of 3.4% of reaching the playoffs. They were shackled with some of the worst relief pitching in the history of the sport.

They then proceeded on a five-month streak of torrid play during which they matched the formidable pace of teams like the 106-win Los Angeles Dodgers and their 2017 World Series foe, the elite Houston Astros. Counting the playoffs and the end of the regular season, the Nationals entered their home portion of the series compiling a remarkable record of 18-2, the best winning stretch in their 15-year history.

Then came the Houston three-game sweep on Washington's turf.

But back in the single-game elimination Wild Card contest against Milwaukee, trailing 3-1 with two outs in the bottom of the eighth inning, there was a 98.6% chance Washington would fall - until the young Soto stroked a stunning, bases-loaded single to right field that was misplayed by Milwaukee rookie outfielder Trent Grisham, saving the Nats' season in the nick of time.

With no outs and trailing 3-1 in the eighth inning of deciding game 5 in Los Angeles, there was a 93.3% chance they would lose - until Rendon and Soto hit back-to-back homers off the venerable Clayton Kershaw, pitching in relief. Veteran hitter Kendrick would hit a grand-slam in the 10th inning to carry the Nationals to the National League Championship Series.

Apparently wary of the necessity for any more late-inning heroics, the Nats overwhelmed the 11-time World Series champion St. Louis Cardinals in a four-game sweep to earn Washington a berth in the World Series for the first time since 1933.

A Series to remember

Installed by Las Vegas book-makers as the biggest World Series underdog in 12 years, the Nationals shocked everyone by defeating two of the best hurlers in the game, Cole and Verlander - in Houston - to claim a 2-0 Series lead before returning home for a possible three games at Nationals Park.

All of those games became necessary when the Astros silenced the Nationals 4-1 in Game 3 on Friday night behind the off-speed pitching of Zack Grienke; shut-down relief appearances by Josh James and Will Harris; the prolific bat of Altuve; and an exclamation point of a sixth-inning home run off Anibel Sanchez just inside the left field foul pole by catcher Robinson Chirinos who also homered in Game 4 against Corbin.

That game on Saturday that turned into an 8-1 debacle for Washington and guaranteed the Series would return to Houston, was supposed to be the Nationals' number-three starter, Corbin, against a mix-and-match collection of Astros relievers to start the game.

Except, apparently, no one told Houston reliever José Urquidy he was supposed to have only a short stint on the mound. Reaching the major leagues for the first time in July, the rookie dominated the Washington line-up through an impressive five full innings of shut-out, walk-free ball, offering a more masterful and polished performance than any of the high-priced, marquis starting pitchers thus far on either team.

Game 5, which was supposed to have featured a repeat of the Series opening match-up between starters Cole and Scherzer, found the Nats at a severe disadvantage with Scherzer's injury. They gamely tried to overcome, but Cole was too much for them and now it's an elimination game ahead for Washington.

If they pull off their second championship in three years, the Astros have an opportunity to cement their legacy as one of the great teams in the history of the sport. With two more post-season upsets, the Nationals can claim the status of a miracle team for the ages. No pressure.

The President and first lady showed up for part of the game, sitting with Major League Baseball executives and a wounded warriors contingent. Trump was reportedly given the opportunity to throw out the first pitch but declined. Nationals owner Mark Lerner says the president chose to attend just a portion of the game to reduce security disruptions, for which Lerner said he was grateful.

He also emphatically stated Mr. Trump was welcome at the ballpark. Trump received 4.1% of the D.C. vote in the 2016 presidential election.

After the president signaled his intention to attend Game 5 earlier in the week and indicated he would not throw out the first pitch, the Nationals announced Friday that D.C. restaurateur and humanitarian José Andrés would do the honors.

Andrés is a frequent critic of the president's immigration policies and settled a legal dispute with the Trump Organization after he backed out of a contract to open a restaurant at the Trump International Hotel on Pennsylvania Ave., following controversial Trump comments on immigration that Andrés said he found to be offensive. Andrés was given the James Beard Foundation's Humanitarian of the Year award in 2018, largely for his efforts serving millions of meals to Puerto Rican hurricane victims.

A previous version of this story incorrectly said José Altuve scored a solo home run to clinch the American League Championship Series for the Houston Astros. In fact, Altuve hit a homer that scored two runs. 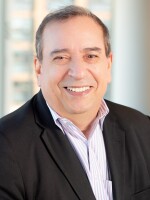 Robert Garcia
Robert Garcia is the Executive Producer of NPR Newscast, the unit that provides the most listened-to content in public radio with 28.6 million listeners each week. Garcia oversees the production and broadcast of 37 live newscasts Mondays through Fridays, and 24 each day on Saturdays and Sundays.
See stories by Robert Garcia