John Carpenter On The Enduring Sound Of 'Halloween'

Michael Myers is back. The boogeyman from the Halloween movies has returned to terrorize Laurie Strode — played again by Jamie Lee Curtis — exactly 40 years after the original film was released.

While the original Halloween score is one of the most recognizable and enduring horror scores ever written, it was also one of the cheapest. Carpenter's 1978 film, about a masked butcher stalking babysitters on Halloween night, had a budget of around $300,000 — no money for an orchestra or big-name film composer. So Carpenter, who learned music as a kid and had played in bands since college, booked a synthesizer studio in LA and plunked down some simple tunes.

"I only had three days to do the music to Halloween," Carpenter says. "I recorded five or six themes. And this wasn't scoring to picture. This was just scoring blind, and then I would cut the themes into the movie. I had to guess at various moods. What surprised me is, they actually fit pretty well into the movie. It's a cheap but effective way of scoring."

In writing these minimalist pieces for analog synths, Carpenter created a propulsive, dreamlike sense of dread. The music transformed Halloween from low-budget slasher flick to one of the most significant American horror films. "It's right up there with Psycho, The Texas Chainsaw Massacre and Alien," film critic Matt Zoller Seitz says. "Michael [Myers] doesn't run—he walks, which makes him much scarier. And then listen to the score: There's not a lot of fuss in the score. It's as minimalist and effective as that butcher knife that Michael carries."

Carpenter is no longer directing, but has been writing catchy, hypnotic albums and playing live concerts. He says he appreciates Halloween's enduring success.

"I love what Halloween has done for me, and I love the movie itself," Carpenter says. "And every time a sequel is made, I get paid." 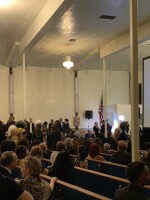