Today is the 75th anniversary of Orson Welles’ broadcast of War of the Worlds that set off a panic nationwide as people prepared for a Martian invasion.  In this podcast, Wes Sumner talks with Hakeem Oluseyi about the possibility of an alien invasion. Oluseyi is an internationally respected astrophysicist.  He holds master’s and doctoral degrees from Stanford, travels the world discussing galactic structure and has been featured on the Discovery Channel and National Geographic. 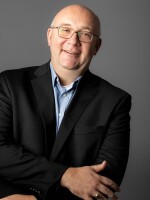 Wes Sumner
Dr. Wes Sumner joined Florida Institute of Technology in 2009, and currently serves as Chief of Staff and Vice President for Communications. In addition to acting as university spokesperson, he oversees the communications office, creative services and WFIT-FM.
See stories by Wes Sumner