'Boxing Is The Love Of My Life': A Woman Fights For A Shot At Gold

When she was 16, Tyrieshia Douglas was arrested for street fighting. As she remembers it, her juvenile court judge recommended she take up boxing. Now she's a 23-year-old living in Baltimore with her heart set on winning one of the first gold medals in women's boxing, a sport that will make its Olympic debut this summer.

"I know I'm a woman, but when the bell rings I'm like a monster," says Douglas, who was profiled by Marianne McCune on Monday's All Things Considered. (You can listen to that report by clicking on the audio link below.)

Photographer Sue Jaye Johnson has been documenting Douglas' efforts, too, as well as those of 23 other fighters competing this month for three spots on the U.S. Olympic women's boxing team. Her photos give a sense of the long road these women have traveled to get to this month's competition — and Douglas' story is no exception.

While Douglas was growing up, both of her parents were addicted to drugs. She and her siblings were raised by a combination of aunts, uncles, cousins and foster parents.

"I was born into a rough family," says Douglas, who didn't find stability until 14, when a second cousin officially adopted her and her two younger siblings. That same cousin helped introduce her and her brother to boxing.

"The first memory that I have of ever seeing boxing ... I was like, 'Oh my gosh that is so amazing — you get to beat up people for free,' " Douglas says.

Today, her relationship with the sport has evolved into something far more intimate. 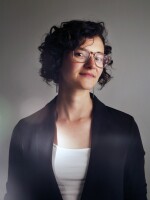 Nicole Cohen
Nicole Cohen is an education editor at NPR. Prior to joining the Education Desk, she was a producer for NPR's Arts Desk, where she produced and edited arts features and interviews for NPR.org. She was part of the team that created NPR's annual Book Concierge, a collection of the year's best books as chosen by NPR staff and critics. Her other arts features include This Is Color and the podcast recommendation site. She also coordinated the Web presence for Fresh Air.
See stories by Nicole Cohen