The weather stayed hot but we still got a bunch of new music in October.

Jeff Tweedy and his bandmates return after a hiatus with brave, challenging music.  Angel Olsen's All Mirrors delivered a compelling and unpredictable balancing act between the intimate and the epic in both vocal delivery and production.  DIIV digs deeper into pain, addiction, and recovery on their grittily beautiful third album.  Following the spacey, artful U.F.O.F. by only five months, Big Thief's Two Hands opts for a crisper, rawer, more jagged approach.  Bodega shaved off the rough edges of the dance punk sound, replacing it with newfound sonic power. The Muffs released thier first new album in 5 years.  Grace Potter's sophomore solo outing recovered some of the bar-band swagger that marked Potter's work with the Nocturnals.

Check out our playlist of some of our favorite releases in October.

Robb West
A transplant from Athens, Georgia, Robb maintains WFIT's website and social media and is the host of Left Of The Dial.
See stories by Robb West 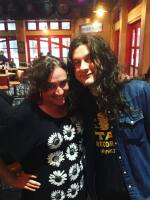 Todd Kennedy
Originally from Boston, Todd Kennedy began volunteering at WFIT 89.5 FM in 1992 as a late night jazz DJ. In 1998 he was hired as Director of Operations and in 2004 he became Program Director.
See stories by Todd Kennedy