Blues With A Twist: Best Blues Albums of 2020 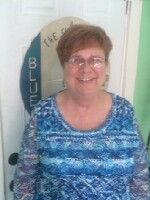 Mary Elwell (Sister Mary)
Originally from Alabama, Sister Mary has now been in Florida for 50 years. In 2003, she started volunteering at WFIT during the fund drives. One Saturday, she volunteered during the Saturday Blues show. This led to her helping out with the Playlists on the the Blues Shows. In 2012, she started as the co-Host with Jeanne Kelly on Blues with A Twist . Sister Mary acquired her love for the Blues from her Dad who loved Swing / Jump Blues. Sister Mary has fond memories of doing the jitterbug with her Dad in their living room. According to Sister Mary, the main reason she started volunteering at WFIT was because she loved the blues shows so much. Now, she is able to create her own playlists and really loves doing it. She's also had a wonderful time in helping other WFIT DJs create Playlists for their shows. Since the other WFIT DJs have been doing this for such a long time, it’s wonderful to see them build their Playlists. Sister Mary also enjoys being a roving DJ and having the opportunity to sit in on the other DJ’s shows. If there’s a special Blues song you want to hear, chances are it’s in Sister Mary's library. Send her an email at m_woolley@bellsouth.net and she'll see what she can do for you. Sister Mary thanks you for supporting WFIT, 89.5FM.
See stories by Mary Elwell (Sister Mary)